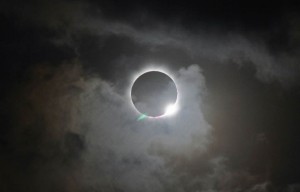 August 21, 2017, the Great American Eclipse! And I have the good fortune to live in what was referred to as the “Path of Totality.” For one minute and twenty-seven seconds, give or take a few, the moon completely blocked out the sun. We were able to take off our viewing glasses and – WOW. Words cannot describe. There are plenty of pictures. And they sort of capture it. But there was this feeling that came over me. And I just had to give a couple of full-throated “Yawps” and “Whoo-hoos” to the world.

Later that same day, I met with a couple from Chicago who had come to St. Louis for the eclipse. They wanted to get married on this auspicious day, and so we met in Lafayette Square Park for a simple, quiet and lovely ceremony. They had written their own vows. And although I do not remember everything that they said, it was clear they understood that the commitment they were making to each other was about “totality.” They are all in, 100%!

Sometimes people wonder: Why have a marriage ritual? Because even the best of words are not enough to express totality.