One of the ways a couple can put their own unique stamp on their wedding ceremony is to perform a meaningful unity ritual. So, what is a unity ritual? At a wedding, it is a symbolic movement or set of movements which expresses the unity of the couple. The most common unity rituals seen at American weddings include the exchange of marriage vows, the giving of wedding rings, and the first kiss as a married couple.

Other cultures and religious practices have unity rituals which are included in a wedding ceremony, some of which we are seeing more of here in the United States when people bring their treasured traditions with them as them emigrate. Some of these include the lasso ceremony, circling rituals, hand washing, or a garland ceremony.

Some of the unity rituals you may be more familiar with include lighting a unity candle, blending sand, Celtic hand fasting, or tree planting.  Some unity rituals can be created or adapted to include children, if the couple is bringing children into the marriage.

But if you think that you would like to explore other possibilities, ask yourselves if you want to say something more, express another aspect of your commitment to each other, or feature something about your relationship as a couple to the wider community. If you are easily creative, you may come up with an original idea. However, most of us need help coming up with ideas, so rest assured that there are plenty of options posted on Pinterest, WeddingWire, and The Knot every day. 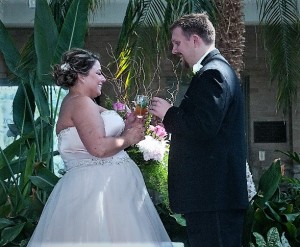 As a couple who enjoy exploring new craft beer together, Sue and Eric knew that they wanted to share a glass of beer for their unity ritual (see photo). Sometimes it can be that simple!

An experienced wedding officiant should be able to discuss options with you to help find just the right unity ritual to enhance your marriage celebration. Contact me to talk about your wedding ceremony today!