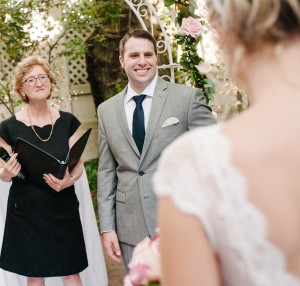 “Presentation of the Bride”

When discussing the various aspects of a wedding ceremony with a couple, it is always interesting for me to see how they resolve the questions raised by the old tradition of “presenting” or “giving away” the bride. As a wedding officiant, I have never felt comfortable asking the question, “Who GIVES this woman to be married to this man?” I mean, REALLY? Although it sometimes still happens in other countries and cultures, most people here are way past GIVING women away; treating them as property owned first by the father, and next by the husband.

THANK GOODNESS! So I encourage couples to think about the real value this moment in the ceremony holds for them.

The tradition of the father of the bride escorting her down the aisle to a waiting groom is still loaded with meaning for most who choose this ritual. And, if not the father, sometimes both parents, sometimes the mother (if the father has not been an active presence in the bride’s life), a brother, a step-father, etc. will walk with the bride. In a broader sense, this ritual shows the support and blessing of the families for the marriage. The strength and power of the tradition seems to be in its marking a moment of transition from the families in which the couple were raised, to the new family which is created by the very act of the marriage.

And so in the spirit of showing such support from both families, more and more couples are choosing to do a makeover of this ritual by including all of the parents, none of the parents, friends, godparents, adult children, or others who accompany the bride and sometimes the groom, as well. Many same-gender couples have led the way in making this old ritual more relevant. When you have two brides or two grooms getting married, there tend to be fewer assumptions and traditions by which couples feel bound.

In addition to the various options around who escorts the couple getting married at the opening of the wedding ceremony, what words to say?  Well, many of my couples are choosing to forego words altogether. So the “transition” takes place with no question being asked, or statements being made by the officiant. When the bride arrives with her escort, hugs, kisses, and handshakes are exchanged, the escort goes to his or her seat, the couple stands with the officiant, and the ceremony continues. The actions speak for themselves.

Other times, the couple may have me say something like, “Who has the honor of presenting this woman who has chosen to marry this man?”

And then there is the choice for me to address all of the parents, with one or more questions like,

Do you bless your daughter, and your son, who have chosen to be married this day? Parents:  We do.

Celebrant:  Do you celebrate with them the decision they have made to choose each other? Parents:  We do.

Celebrant:  Will you continue to stand beside them, support them, and encourage them with each passing year? Parents: We will.

These are but a few examples. The bottom line? Make sure that whatever happens in this opening ritual reflects your beliefs about the transition you are making from your families of origin to your life as a married couple.