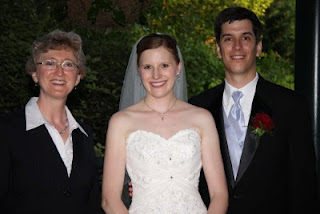 “We used Ruth Ellen Hasser from St. Louis Ceremonies for our May 22, 2010 wedding at the St. Louis Zoo. Ruth Ellen was basically a pinch-hitter for us—our original officiant decided to take a sabbatical and kindly arranged for us to have Ruth Ellen stand in instead. Being as I was in California attempting to plan a wedding in Missouri, we didn’t meet right away, but corresponded by e-mail for a few months until I was next in town. We first met at a St Louis Bread about 2 months before the wedding, and the moment we did, it felt like we’d been friends for years. She was very kind and considerate and she certainly helped me turn my ‘I want a simple ceremony’ sentiment into a lovely and special celebration. We corresponded via e-mail, sending ideas and scripts back and forth about 3 times before we were both satisfied that my groom and I had what we wanted. The groom and I waffled about having a rehearsal the day before the wedding until a couple of weeks before the big day, and when we finally decided that we needed to have one, Ruth Ellen was nothing but understanding and gracious, and showed up with a smile to run our short but sweet rehearsal. The ceremony on the day of the wedding went off exactly as we had discussed, and she never veered from our agreed-upon script. Through the entire process, she was calm and helpful, and my groom and I never once had any doubt that she was the correct person to marry us. We would certainly still be married if another person had performed the ceremony, but Ruth Ellen really made the day a special one.”