This is considered “off season” for folks in the wedding business. I don’t know what other wedding professionals do during these cold winter months, but for me there is more time to begin writing the ceremonies I’ve already committed to officiating in 2014. Actually, I write ceremonies year round, but at this time of year I can write with a little less pressure because I am performing so few ceremonies right now. It’s also a good time to take a look at my website to see what needs updating, as well as to update the photos and info I have on my online ads.

During the winter, there is also more time available to meet with couples who are considering me as a Celebrant for their ceremonies in 2014 and 2015. Before I got into this Celebrant work, if you had told me that I would be meeting at least sixty couples a year to talk with them about their weddings, I would have assumed that I would eventually get bored or at 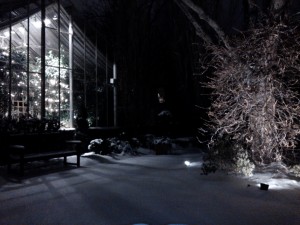 least a little bit goofy with so many meetings at which to have, more or less, the same conversation. But, honestly, although I may be covering the same general topic (weddings), with a lot of the same basic questions being discussed, I never get bored because each couple is different and possesses a unique perspective on what they want to communicate in their ceremony.

And that is what I find to be one of the delightful rewards about this work. Each couple has their own story. Although many couples have common elements in their stories, each is still unique and lovely. And when they choose me to be their Celebrant, they entrust me with the privilege of helping them to tell their story and to celebrate the meaning they find in their story; sometimes with words, sometimes with rituals, often times with both. Now, that’s my idea of a good day’s work.

One of the more pleasant surprises for me in being a Celebrant is just how much I enjoy meeting with couples for a complimentary interview. This usually happens after a couple has contacted me, either by phone or email, expressing an interest in getting to know more about what I do and how I can help them to have a meaningful and personalized wedding ceremony. When the couple is ready to meet, we schedule a meeting at a mutually agreeable date and time, usually at a St. Louis Bread Company, Kaldi’s, or other café. Meeting together gives the couple a chance to ask me any questions they may have as we talk through an outline of options for their wedding ceremony. It gives us an opportunity to get to know each other a little, helping all of us to get a feel for how well we might work together, should the decision be made to hire me as their officiant.

After four years of working as a Celebrant, I find I still look forward to meeting each new couple, learning something about what makes them unique, and enjoying the delight of those times when I am asked to share in one of the most important days in their life together!

From a recent PRRI press release:

“New research by the Public Religion Research Institute has found that American Catholics are in fact more supportive than any other Christian tradition when it comes to favoring legal recognition for same-sex couples, and while there’s still some division over whether that recognition should be civil marriage (43%) or civil unions (31%), only 22% are categorically opposed to any form of recognition. This is just one among many findings that show Catholics favor gay rights much more than perhaps thought.”

I am a trained Life-Cycle Celebrant and Wedding Officiant. I perform wedding and commitment ceremonies for couples who are committed to loving each other. And I am also a person whose spiritual family of origin is the Roman Catholic Church. Until reading the results of this research, I thought my support of same-sex couples put me in a minority among American Catholics. Apparently, I am not in the minority. And I couldn’t be more pleased! 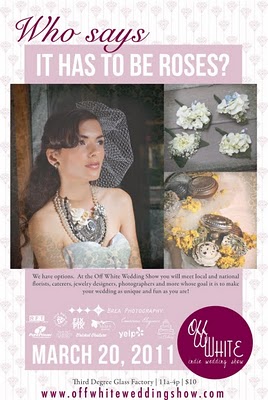 Get your tickets today!

In doing a little background reading on the Navajo Wedding Vase, I decided to research a popular blessing chosen by a number of couples with whom I have worked. It is most commonly called “The Apache Wedding Prayer,” but I was wondering if it was really Apache in origin, because it has also been known as an “Indian Wedding Blessing.” According to author Rebecca Mead, the earliest version of this prayer was written in Western novel Blood Brother, by Elliott Arnold. In 1950 it made its way into a film adaptation of the novel called Broken Arrow, written for the screen by Albert Maltz and starring Jimmy Stewart. Alas, the popular prayer is not from Apache tradition, but has its origins in fiction and in Hollywood.

Nevertheless, feel free to use it if it speaks to you! Here is the version most couples I know have used:

As we approach another Valentine’s Day, I offer a quotation attributed to author Daphne Rose Kingma, and used at a recent St. Louis wedding:

“For it is in loving, as well as in being loved, that we become most truly ourselves. No matter what we do, say, accomplish, or become, it is our capacity to love that ultimately defines us. In the end, nothing we do or say in this lifetime will matter as much as the way we have loved one another.” 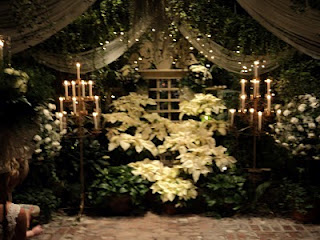 If you want to have a lovely garden wedding in the St. Louis area any time of year, one of your best options can be found at The Conservatory in the Historic District on Main Street in St. Charles. The staff is friendly, courteous, and professional. And the surroundings are simply gorgeous! It is especially lovely to be warm and cozy inside surrounded by lush greenery, while the weather outside is doing its cold, wintry thing.

I took this picture just before a ceremony this past Saturday. For more photos and information on this charming wedding venue, see
www.gardenwedding.com. 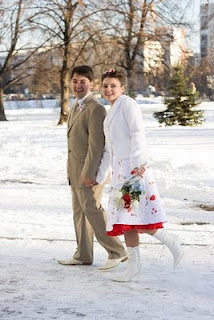 Whether or not the weather will interfere with your wedding plans is always an issue to one degree or another (pun intended). Of course, if you are planning an outdoor ceremony weather automatically becomes a more significant factor, whatever the season. But during the winter months, weather can become a challenge for anyone’s wedding plans because of nasty things like freezing rain, ice storms, or simply your basic blizzard. Your guests may end up waiting in airports, stuck in hotels, or unable to get out of their own driveways. So why plan a winter wedding?

The reasons can be many and varied, but here are a few. Sometimes it’s just a timing issue related to many other complex factors in the couples’ life together. Other times couples choose winter because they can get reduced rates on just about everything during “off season” for the wedding industry, having their dream wedding for a fraction of the cost of a spring, summer, or autumn wedding. And then there are those who just love winter and want to celebrate their love for each other during their favorite season.

Since no one I know has figured out how to control the weather, couples who want to plan their weddings for the winter months should just roll the dice and take whatever comes their way. In St. Louis, although you could get freezing rain, an ice storm, or a blizzard, chances are you could also get one of those crazy winter days with lots of sunshine when the temperature hits 50. Either way, it is good practice for married life, where couples agree to hang in there with each other with no available accurate forecast for what the future will bring! 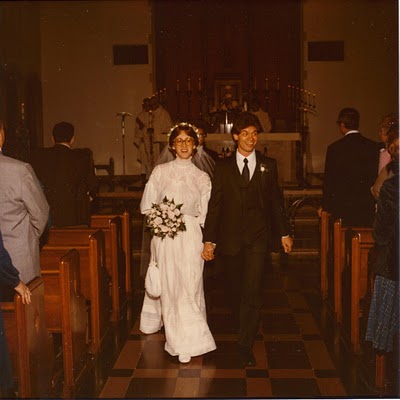 As another Thanksgiving rolls around, I find I have much for which to be grateful. As far as my Celebrant work is concerned, I am deeply appreciative of the fifty-two couples who entrusted their wedding ceremonies to me this year. Each one unique, each one a delight. Do I have an amazing job, or what?

And, speaking of weddings and Thanksgiving, my husband and I were married the Friday after Thanksgiving in 1983. Of course this means that our anniversary falls on Thanksgiving Day from time to time. So, this Thursday we will celebrate our twenty-seventh year of marriage. Time does fly, when you’re having fun! 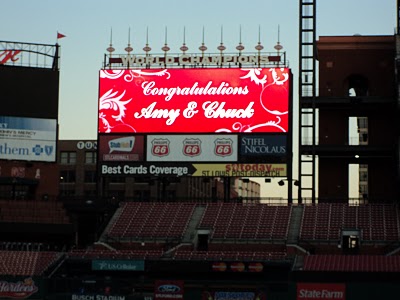 Recently I had the opportunity to officiate at a wedding at home plate in Busch Stadium. Now, it might not be the first place most people think of when considering options for wedding venues. But for two die-hard Cardinal fans, it can be the perfect place. The staff was friendly, knowledgeable, and professional. And Fredbird even dressed for the occasion in a white jacket!

For more information, go to http://stlouis.cardinals.mlb.com/stl/ballpark/
Scroll down the page and click on “nonbaseball events,” then click on “weddings.”